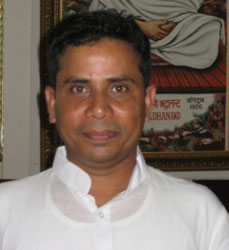 Acharya Harish Chandra Ji, born in Calcutta (now Kolkata), is an engineer by education and profession. With an Aeronautical Engineering degree from IIT Kanpur and a Ph.D. in Combustion Sciences from Princeton University, he had been engaged with companies in India, Germany and Norway in research of combustion processes. Interestingly, during his professional life, he continued to maintain a close relationship with Arya Samaj including a stint as the President of Arya Samaj in Pilani, Rajasthan, and studying Vedic literature.

In July 1996, Acharya Harish decided to renounce his engineering profession, and instead, dedicated himself to the spread of the message and the knowledge of Vedic scriptures through many lecture tours in India, Europe and North America. He continued his mission under the banner of Arya Samaj in Birmingham (UK) and Center for Inner Sciences (CIS), which he founded as an institution to present Vedic spiritual sciences such as Meditation and Yoga to western audiences and to train teachers.

Acharya Harish Ji is excited to be a part of the Arya Samaj Greater Houston team. In addition to his duties as a qualified priest, he intends to continue teaching Patanjali Yoga and meditation to people of Arya Samaj and beyond. Acharya Ji is married to Dr.Kavita Vachaknavee, who is an author, a poet, a critic and a social activist. Acharya Ji can be reached at (832) 874-3248 on phone.

Acharyaa Kavita-ji was born in a prominent Arya Samajist family in Amritsar with a history of four generations. She studied in Kanya Gurukul, Hathras (UP), graduating in Sanskrit from Sampurnanand Sanskrit University, Varanasi (UP). After her marriage, she continued her studies and obtained MA, MPhil and PhD in Socio linguistics & Hindi literature. She was Founder Secretary of Vishwambhara, an organization for propagation of human values based on the Vedic philosophy, especially among children. She is an eminent contemporary writer in Hindi literature with her poems/short stories included in the syllabus of the University of Delhi and the University of Oslo, Norway. She has received a number of awards for contributions to different streams of Hindi language, literature and journalism, including its usage in information technology by Indian High Commission, London and many other institutions. She is well recognized for her contributions on IT related to Indic languages in conferences held in India, Spain and UK. She has been a visiting faculty of graduate studies in Hyderabad and Wardha. She is a Consultant and Examiner for Cambridge International Examination, Cambridge University.

She travelled extensively in Thailand on a lecture tour organized by the Arya Samaj Bangkok. Her close lifelong association with Arya Samaj in different capacities were maintained even with her family responsibilities. She edited three books and authored four books, including one on Maharshi Dayanand - and numerous articles published in leading periodicals. Her website & blogs are followed by tens of thousands followers.

At Houston, Acharyaa Kavita-ji devotes her time and energy towards DAV Sanskriti School as its Principal and Director. She also fills in the responsibilities of an Acharyaa of the Arya Samaj Greater Houston as occasions arise. Indeed, it is hoped that the preaching activities of ASGH will gather new momentum with our first ever female Acharyaa. She is married to Acharya Harish-ji - they have a daughter and two sons. For further information, please contact at the DAVSS.