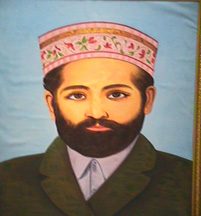 Pandit Gurudatta is recognized to have been the greatest achievement of Rishi Dayananda for his ancient Aryan thoughts. Had not death cut short his scholastic career so early, the Arya Samaj and through it the whole world of religious thought may have been considerably enriched by his contributions, of which the few he did find time to write, gave sure promise.

Pandit Gurudatta was born on 26th April 1864. His father was Lala Radhakishen Sardana of Multan whose ancestors had distinguished themselves in the both letters and arms. From his grandfather, he inherited an aptitude for Persian which by a little training enabled him to dip into Persian literature. He developed a fondness for Sanskrit too in his school days.

The first book after Sanskrit Primer, he put his hands on, was the Rig Vedadi Bhashya Bhumika of Swami Dayananda. Soon, his impatience, and irresistible zeal to read more prompted him to challenge the authorities at Arya Samaj in Multan to either make arrangements for his study of the Ashtadhyayi and the Vedas or accept that the scriptures for which they claimed infallibility were only trash. In his heart of hearts, though, he was convinced of the intellectual and spiritual worth of the Vedas. The Multan Arya Samaj engaged a Pandit who found it beyond his learning and capacity to satisfy the young Gurudatta..

In 1881, he martriculated and got himself registered in the Arya Samaj as a member. In 1883, he finished his undergraduate studies. In the interim, he founded a Free Debating Club, where philosophical questions were discussed. Gurudatta was quickly assimilating ideas and facts. Those who had the occasion to live close to him saw a strong skeptic disposition in him, which to them was a mark of an intensely inquisitive mind. Gurudatta, even when some thought he was an atheist, continued to be a staunch member of Arya Samaj. And when the news was received of Rishi Dayananda’s illness at Ajmer, the Arya Samaj at Lahore chose him, only nineteen years old, and Lala Kivan Das to go to Ajmer to tend Swami Dayanand.

In Ajmer, he saw the Rishi dying. Not a word passed between the Master and his devotee, but Gurudatta’s whole nature had silently taken a turn. When he returned to Lahore, he was a changed man. His former impatience, his skepticism had given way to seriousness. Somehow a feeling had dawned on Gurudatta that the Rishi had by his last glance let the mantle drop on his shoulders.

In 1886, he passed his M.A. His subject was Physical Science. For two years, he was an acting Professor at the Government College where his knowledge and teaching capability received well-merited appreciation. By this time, a movement to establish a college in memory of Rishi Dayananda had been launched by the guiding spirits of the Arya Samaj. Gurudatta threw himself heart and soul into the campaign to collect funds for that. The D.A.V. College of Pandit Gurudatta’s dream was an institution where Brahmacharya would be the dominant factor in life of the students and ancient Shastras (scriptures) would form the primary study in the curriculum of the institution. However, leadership of Arya Samaj sought it fit to give the D.A.V. College its present shape and character. Pandit Gurudatt expressed strong dissatisfaction with the educational policy of Arya Samaj’s then conductors.

In the short period of six years after he had seen the Rishi, he had acquired marvelous mastery of sacred books in Sanskrit. A treatise by him entitled “The Terminology of the Vedas” was included in the course of Sanskrit at the Oxford University. His translations of a few of the Upanishadas were published by an American publisher following Parliament of Religions held in Chicago in 1896.

Gurudatta could speek for hours in Sanskrit, a feat that won him the title ‘Pandit’. He in his humility always considered himself a Vidyarthi (a student), while those who heard him saw in him a Pandit. This was the spirit which marked Gurudatta throughout his career. The Ashtadhyayi class, taught by this twnety six years old, attracted pupils of all ages.

He had tried to compress within three years what normally should have taken a life-time to accomplish. He had amassed a great deal of learning and became an authority on scriptures. But this ceaseless strain had cost him his health. During his school days Gurudatta had been fond of physical exercise. His physique was strong, but his mental labor had of late been immense. In 1889 he fell a victim to tuberculosis and finally, succumbed to it in March 1890.

His references to incidents in Rishi Dayananda’s life had always formed a significant portion of his speeches. People had therefore urged him and he had gladly consented to write a biography of the Rishi. When Gurudatta was on the point of death, somebody asked where his manuscript of the biography was. The Pandit characteristically replied, ”I have been trying conscientiously to record the life-account of my Rishi not on paper, not in ink, but in my own day-to-day life. It was my ambition to live Dayananda. My body, alas! has failed me. I lay it down, gladly in the hope that the next vehicle will be more in conformity with the aspirations of the soul.”

He was a heroic soul, passionately zealous, impatiently inquisitive, conscientious and inordinately sincere and true. He believed in the Vedas and yet in his zeal to be able to read more of them declared his readiness to denounce them as trash.. He believed in God and yet in his zeal to understand His nature more thoroughly he argued His existence with himself and others and thus appeared as if he were an atheist. He was born for a mission, and when the last glance of the Rishi had pointed the path to him, he had, as it were, almost doubled his age, and become thoughtful like a man of fifty.

This biography is a modified and condensed version of A Biographical Sketch Of Pandit Gurudatta By Pt.Chamupati M.A. on http://www.geocities.com/Athens/Ithaca/3440/dayanan.html