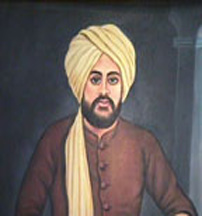 There had been many shining stars who worked for the propogation of the philosophy and principles of Arya Samaj that was founded by the great visionary Maharshi Dayanand Saraswati in 1875. Pt Lekh Ram is one of the three contemporaries - Swami Shraddhanand who founded Gurukul kangri, Pt. Guru Datt who wrote such matchless books that found a respectable place in Oxford University, DharamVeer Pt. Lekh Ram who wrote Kuliat Musafir that became the most authentic document on religion.

Pt. Lekh Ram was born on 8th.Of Chaitra 1915 in the village Saiyad Pur in the Jhelum district of Punjab. His father was Tara Singh and the mother was Bhag Bhari.

He was influenced by the writings of Munshi Kanhaiya Lal Alakhdhari and came to know about Maharshi Dayanand Saraswati and Arya Samaj.He founded Arya Samaj at Peshawar. He also published a paper Dharmopdesh.

He resigned from his government job and devoted himself whole heartedly to writng and speaking for the propagation of the the ideals of Arya Samaj and Vedic Dharma. He became a preacher of Arya Pratinidhi Sabha Punjab. He also vowed to write the authentilc life history of Maharshi Dayanand Saraswati. For this, he travelled far and wide and produced a detailed account of the life of the founder of Arya Samaj. He established his view point so forcefully that nobody dared to come forward to oppose.

There is an interesting episode of his confrontations. Details are given on the following website, http://www.irshad.org/exposed/mubahalc.php

According to the article on the quoted website, Mirza Ghulam Ahmed Qadiani issued Mubhala to all or any Aryas. Muhabala is a kind of prayer challenge or curse that will result in a sever divine punishment on a liar. The key to understanding the mubahala resides in these words: "Seldom did two people enter a mutual cursing except the liar of the two became afflicted."

if our assertion is false Divine Distress and punishment may descend on us. In this way, the words contained in each of the two Mubahalas should be publicly verified for truthfulness, believing that Divine punishment must fall on the party who swears falsely. And there shall be a waiting period of one year for Divine Decision to come down. If after passage of one year Divine punishment falls on the writer of this pamphlet, or does not fall on the adversary, in either case, this humble self, shall suffer a fine of Rs.500/- .

Summarizing, One may note that:

* Mirza challenged all the Aryas to a Mubahala;

* Mirza would win if Divine Punishment befell upon his rival in one year's time;

If nothing untoward happened to his rival in one year's time or, Divine Fury befell upon Mirza, during this period, in both the cases, Mirza would be proved a liar.

* Duration of this 'sporting event' was only one year; that is, all that was to happen must happen within one year.

As a rejoinder to Mirza's pamphlet, Surma-e-Chashm-e-Arya, Pandit Lekh Ram wrote his Nuskha-e-Khabte Ahmadiya (Rais-e-Qadian, Vo1. 1, P. 121) in which he wrote his acceptance of the challenge in these words: "I humble, Lekh Ram, son of Pandit Tara Singh Sahib Sharma, Author of Takzeeb-e-Braheen-e-Ahmadiya and this pamphlet, (Nuskha-e-Khabte Ahmadiya) declare in soundness of all my senses and understanding that I have read the pamphlet Surma-e-Chashme Arya from beginning to end, not once but many times, having grasped its arguments fully and have published its reply in refutation in the light of Sat Dharam (true religion). In this pamphlet, the arguments of Mirza Sahib have not impressed me one bit because they are not righteously oriented. (After dilating on this subject the Pandit wrote in the end:) O, Permeshwar! (God) Make a decision between us truly, because never can a liar glorify in Thy Audience against the truthful. Writer: Your eternal slave, Lekh Ram Sharma, Sabhasud Arya Samaj, Peshawar, presently Editor, Arya Gazette, Ferozepur Punjab," (Roohani Khazain, Vol. 2, P. 326-332, Summary}.

The Mubahala challenge of the Pandit was thrown in 1888. By the end of 1889, result was to be out as Mirza stipulated, but the year passed away and nothing happened. Pandit Lekh Ram lived much beyond 1889. Actually he died in 1897 and Mirza never paid him 500 Rupees. The Pandit knew he wouldn't, true to the couplet: "Knots of my purse, Oh, open them not."

Pandit Lekh Ram died the death of a martyr on 6th.of March1897 from stab wounds a fanatic inflicted upon him.

We should abide by his advice that Taqreer and Tehreer should continue from the platform of Arya Samaj.

This article has been adopted from an article originally written by Dr. Dharam Pal Arya - Ex Vice-Chancellor, Gurukul Kangri Vishwavidyalaya