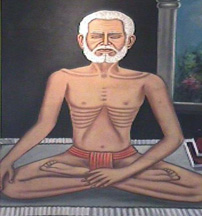 Swami Virajanand, the blind sage of Mathura and the celebrated teacher of Swami Dayanand Saraswati who founded the Arya Samaj, was born in Kartarpur near Jalandhar in the year 1778 in a Brahmin family. At the tender age of five, the boy lost his eyesight from an attack of small pox. Soon thereafter, the boy's father who had initiated him into the rudiments of Sanskrit learning, passed away. Thus, the boy was thrown to the mercy of his elder brother and sister-in-law at very young age. As they did not treat him well, the temperamental Virjanand soon left their home.

His wanderings led him to Rishikesh where he led a life of meditation and austerity for about three years. Tradition has it that Swami Virjanand left Rishikesh for Hardwar at the instance of a divine command. At Hardwar, Virjanand came in contact with Swami Purnanand, a renowed Sanskrit scholar who initiated him into 'sanyas'. Swami Purnanand created in him a deep love for sanskrit grammar and for the "arsha" Shastras (scriptures authored by rishis). Soon, Virjanand began to master other branches of Sanskrit literature, and also took up teaching others.

Swami Virjanand left for Kashi, the well-known city for Sanskrit learning and for higher studies. Here he lived for about 10 years, mastering Meeemansa, Vedanta, Ayurveda, etc. Soon, he came to occupy a place of eminence among the scholars of Varanasi. From Varanasi, Swami Virjanand went to Gaya where he made a comprehensive and critical study of Upanishadas continuing the work he had done at Hardwar and at Varanasi. From Gaya, Swami Virjanand went to Calcutta which was, at that time. attracting Sanskrit talent from all over the country. At Calcutta, Swamiji lived for a number of years impressing the citizens with his mastery of Sanskrit grammar and literature. In spite of the material comforts he had at Calcutta, Swami Virjanand soon left that city and settled at Gadia Ghat on the banks of the Ganges. It was here that the then Maharaja of Alwar came across the Swamiji and was greatly impressed by him. On the invitaion of the Maharaja, Swamiji agreed to come to Alwar where he stayed for some time. At the request of the Maharaja, Swamiji wrote "Shabda-Both", the manuscript of which is still treasured in the library at Alwar. From Alwar, Virjanand went to Soron and from there to Mathura.

At Mathura he established a "pathshala" (school) to which students flocked from all over the country. The expenses of the pathshala were met by donations from the Rajput Princes and no fees were charged from the pupils.

Incidentally, at about the same time, Dayanand had been wandering all over the country in search of a guru. Dayanand came across a monk, Poornashrama Swamy. He heard the story of Dayanand`s wanderings and told him,” There is only one man on this earth who can fulfil your desire, and that man is Virajananda Dandeesha. He lives in Mathura." Thus, in 1860, Dayanand found his guru and mentor Swami Virjanand Saraswati at Mathura. And Swami Virjanand found a disciple who had the strength and discipline to carry forward his mission. He was blind. But he was the living form of enlightenment and could clear all the doubts of his disciples, quoting passages from all the scriptures.

Dayanand gladly surrendered himself at the feet of the great master. Swami Virjanand was a very hard task master and he expected a very high standard of diligence and discipline from his students. Dayanand underwent a rigorous training under Swami Virjanand Saraswati. As gurudakshina, Swami Virjanand extracted promise from Dayanand that he would devote his life for the revival of Hinduism. He would work to spread "arsha" literature and knowledge of Vedas in the country. With his extraordinary devotion and sense of service, Dayanand soon became the most beloved and most renowned disciple of Virjanand Saraswati.

Swami Virjanand died on Monday, the 14th September, 1868, at the age of 90. India has honored this great teacher by opening many institutions bearing his name. On September 14, 1971, the Post and Telegraph Department of India released a stamp in his honor depicting the Swamiji in a sitting posture.

The visitor is encouraged to read more about Swami Virjanand. More articles are available on the internet and elsewhere. This article has been adopted from the biography of Swamiji on the following website:
http://www.freeindia.org/dynamic/modules.php?name=Content&pa=showpage&pid=432