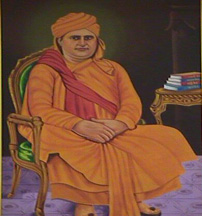 His original name was Mool Shankar. He was born in 1824 in Tankara, Gujarat. His father was a devotee of Lord Shiva. When Mool Shankar was 14 years old, on a Shivaratri night, he witnessed mice desecrating the idol of Lord Shiva and realized the fallacy of the prevailing concept of religion. He left home to search for true God. Along the way, he got initiated into an order of sanyasis (ascetics) who gave him the name Dayanand. He travelled far and wide in his quest for God eventually finding his way to Swami Virjanand in Mathura. He learnt the Vedas and other scriptures from Swami Virjanand, and as per his guru’s instructions went out to preach the teachings throughout the country.

During his travels, he found the condition of India and the Hindu society deplorable and depressing. The country was ruled by the British. Once the cradle of human civilization, religion and culture India was now a storehouse of immense poverty and moving at a rapid pace on a path of self-destruction. The Hindu society was not doing any better, fragmented as it was by region, by sect and by language. Many superstitions, dogmas and undesirable rituals were propounded in the name of religion. They included untouchability, prohibition on education of women, sati (self immolation by a wife upon the death of her husband) and child marriage.

Swami Dayanand resolved to awaken India and the Hindu society. He introduced many positive reforms, among them the abolition of Sati Pratha, child marriage, dowry, untouchability in the prevalent caste system, and introduction of women’s education. He firmly believed that the yoke of the British Empire had to go. He emphasized the concept of nationhood by introducing the word Swarajya (self rule) for the first time and a need for one national language. In his famous book, Satyartha Prakash (The Light of Truth), he sought to dispel rituals, dogmas and superstitions among all Indians.

On April 10, 1875, Swami Dayanand established the Arya Samaj as a permanent organization to continue to educate the Hindus of their rich heritage and to reform the social structure within India, largely through the spread of education, especially that of women. (Note: The philosophy and purpose of Arya Samaj is described in the Introduction section of this web site.)

With his missionary work, Swami Dayanand made numerous enemies among people who preferred the status quo. Many attempts were made to harm him. Finally, on 30th October, 1883 on the evening of Diwali, he succumbed to poisoning by his faithful servant. With a recitation of the Mantras (hymns) from the Vedas and the words, “O Lord, if such is Thy will, let it be done,” he breathed his last. However, his work has been continued by the members of Arya Samaj, and has been extended beyond the borders of India into other countries.