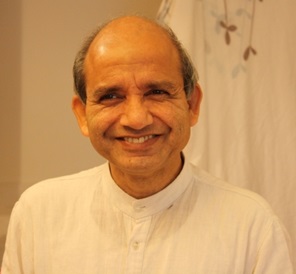 Acharya Harish Chandra Ji, born in Calcutta (now Kolkata), is an engineer by education and profession. With an Aeronautical Engineering degree from IIT Kanpur and a Ph.D. in Combustion Sciences from Princeton University, he had been engaged with companies in India, Germany and Norway in research of combustion processes. Interestingly, during his professional life, he continued to maintain a close relationship with Arya Samaj including a stint as the President of Arya Samaj in Pilani, Rajasthan, and studying Vedic literature.

In July 1996, Acharya Harish decided to renounce his engineering profession, and instead, dedicated himself to the spread of the message and the knowledge of Vedic scriptures through many lecture tours in India, Europe and North America. He continued his mission under the banner of Arya Samaj in Birmingham (UK) and Center for Inner Sciences (CIS), which he founded as an institution to present Vedic spiritual sciences such as Meditation and Yoga to western audiences and to train teachers.

Acharya Harish Ji is excited to be a part of the Arya Samaj Greater Houston team. In addition to his duties as a qualified priest, he intends to continue teaching Patanjali Yoga and meditation to people of Arya Samaj and beyond. Acharya Ji is married to Dr.Kavita Vachaknavee, who is an author, a poet, a critic and a social activist. Acharya Ji can be reached at (832) 874-3248 on phone.