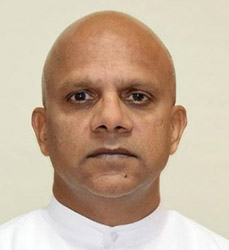 Acharya Bramdeo Mokoonlall comes to Arya Samaj Greater Houston from Mauritius, an island in the Indian Ocean off the east coast of Africa.  Born and raised in an Arya Samaj family, he earned degree in Banking from University of Mauritius, and credentials in Management from ABE UK.

After an extensive career in financial industry, he returned to Darshan Yog Mahavidyalaya, Gujarat, India for studies in Vedic Philosophy.  That led to a dedication to the development of a large number of educational projects and programs of the Arya Sabha of Mauritius. He has been a key resource person for Arya Sabha Mauritius, Mauritius Council of Religions, Arya Pratinidhi Sabha America, Greater Atlanta Vedic Temple and Hindu Center of Atlanta, Arya Samaj Markham, and Toronto Arya Samaj, Canada.

Acharya Bramdeo is author, in English and French, of numerous insightful articles on Vedic philosophy, spirituality and contemporary issues. He is very active on social media sharing philosophical and spiritual thoughts. He is a co-author of a bilingual book on Interfaith and Intercultural Dialogue (from the viewpoint of Sanatan Dharma), and a book in French entitled ‘Enceinte, je sème le sacré’, explaining pregnancy and childbirth related Vedic sanskars.

At Arya Samaj Greater Houston, he is  the school Acharya. His immediate responsibility will be to take charge of DAVSS as coordinator and organize the next in person session and the VSS Global virtual program. He will also do curriculum development for both the schools.  He is capable of much more and will be an asset to us for many other projects of the Arya Samaj.