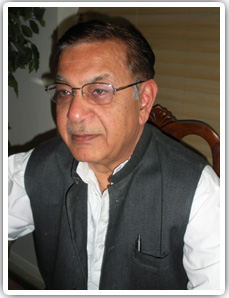 Shri Praveen K. Gulati, an Engineer by Profession, was appointed as the Honorary Priest of Arya Samaj Greater Houston in September 1992. He is a devout follower of the path shown by Swami Dayanand Saraswati. He is known for well organized Yajnas and thought provoking 'pravachans" or sermons. He continued to serve Arya Samaj as the priest until November 1996.

He has filled in during the absences of the the Religious Guides. He has performed Vedic ceremonies in homes and businesses of Arya Samaj members and non-members in Greater Houston area and beyond. He was also a volunteer teacher in the D.A.V. School and for some time, was the director of the school. Recently, he has retired from Arya Samaj related activities because of some health issues.