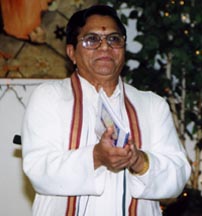 Arya Samaj of Greater Houston has been honored by Dr. Dilip Vedalankar (affectionately called Panditji) by his acceptance to lead our Samaj as our religious guide.

Dr. Dilip, who has earned a doctorate degree in the study of the Vedas from Gurukul University in Hardwar, is a dynamic personality, infused with the creative vision of the Vedic culture. As a learned exponent and interpreter of Indian culture, Vedic philosophy and Hinduism, he has carved out his rightful place as a worthy messenger of the Vedas and a true cultural ambassador of India.

Dr. Vedalankar was a joint secretary of the International Aryan League in New Delhi for many years. As an enthusiastic Vedic missionary, he has traveled around the world spreading the message of the Vedas. He has authored a number of books in Hindi, Gujarati and English on the Vedas, Indian culture and Hinduism. Humanism in Vedas is one of his well-known works. Panditji is also very actively engaged in spreading and propagating sanskrit language at every level (he has a master’s degree in sanskrit from Delhi University and has taught the language at Hans Raj College in Delhi.) He was a honorary secretary of the ‘All Indian Sanskrit Bhasha Prasar Samiti’. More than 100,000 people all around the world have benefited from the samiti’s sanskrit classes.

Dr. Dilip believes the the only way to achieve a lasting peace and harmony among people of all races, religions and nationalities is by going back to Vedas. He firmly believes that the techings of Vedas are eternal and universal and are above caste, creed and race. The Vedas talk and teach about humanism and offer the ultimate answer for unity and fraternity among people. India (AryaVarta) is the oldest nation and Aryans who were the original inhabitants of India are the oldest race in the world.

A new temple is now ready on the Highway 6 at Bellaire area and it is expected to be the hub of a host of religious, cultural and educational activities in the future.