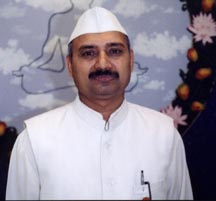 Arya Samaj Greater Houston has been honored by Dr. Tanaji Acharya (affectionately called Acharya ji) by his acceptance to lead our Samaj as our religious guide and Resident Purohit.  Acharya ji is an experienced and enthusiastic Vedic missionary for several years now, having served the Arya Samaj communities in India, UK and Canada.

Born in Maharashtra, young Tanaji, while in ninth grade, came in contact with Swami Shradhanand ji (Harishchandra Guruji) who inspired him to join the Arya Samaj.  Although, during the next six years he completed his B.Sc. in Mathematics, his interest was focused in religion.  Even during his college years he was deeply involved in youth camps, cultural and religious activities.  In 1975, he completely changed his direction in education and joined Dayanand Math (Gurukul) in Dina Nagar, Punjab.  He later moved to Saraswati Sanskrit Mahavidyalaya, Khanna (near Ludhiana) and completed his Shashtri degree from Punjab University.  He has a Masters Degree in Sanskrit and a Ph.D. in Indian Philosophy, both from Meerut University.  Along the way he also attended Sampurnanand Sanskrit University, Banaras, India, where he received the Acharya Darshan degree.  After a brief stint as a Lecturer at Meerut University, he took up a full time assignment as Arya Samaj Pracharak (missionary) in 1986.  He first served in the Arya Samaj in India from 1986 to 1990.  In 1990 he was appointed the Resident Priest at the Arya Samaj of London (UK).  After serving the London community until 1997, he moved to Canada to become the Resident Priest at the Arya Samaj (Markham and Scarborough) from 1997 to 1999.

Acharya ji is the author of a book titled “Relevance of Indian Philosophy to Modern Society”.  This book reflects his deep understanding and creative vision of Vedic culture and is based on his training and experiences.  He has also participated in the publication of several research papers on Indian philosophy. Acharya ji’s main interests are in teaching Sanskrit, Hindi, Yoga, meditation, Vedas, Upanishads and Indian Philosophy.

Acharya ji’s inspiration to devote his life to the cause of Vedas came from an awaking he felt inside from his early years.  He credits his religious, spiritual and social sanskars for leading him on to a path of Satya Gyan (true knowledge).  Even as a child he did not accept blind faith that was not logical and it was his quest for knowledge that made him an inquisitive, lifetime student. Seeking Satya Gyan, he sought out Harishchandra Guruji who had the reputation of guiding the young – in schools and colleges – towards true knowledge by following the path of the Vedas.  Dr. Tanaji was so influenced by the teachings of his Guruji that he felt that others also should benefit from the beauty of this message.  Thereafter, he decided to devote his entire life to spread and share the beauty of the message of Sampurna Veda (meaning knowledge, truth).
According to Acharya ji, his goal now is to spread the knowledge of religion and science as represented by the Vedas.  The Vedas have a solid scientific foundation and offer the dual message of natural and rational knowledge.  Through this message, he wants to improve and uplift mankind in physical, social, and spiritual ways.  He believes that in so doing he will achieve the result he seeks, that is, spreading goodness, humanity, and altruism in this world.
On the topic of Yagna, Dr. Tanaji believes that Yagna is the identity of Hindu or Aryan culture.  Yagna or havan has two aspects: moral and scientific.  From a moral standpoint, Yagnas offer a prime means for physical, spiritual and social development.  From a scientific standpoint, they offer a means to maintain ecological balance.  Maintaining ecological balance is one of the main tasks of the Indian civilization and Yagna is a solution for pollution
What should we do in the name of Hindu religion?  How do we decide what is dharma and what is adharma?  Acharya ji suggests that that which is good for all and relevant for all is the meaning of dharma.  The principles of Vedas are universal and have so much elasticity and understanding that they are always relevant for all and therefore embody dharma.  The elasticity of Vedas flows from the fact that they are able to accommodate all, as appropriate, according to place, person and time. The universality of the Vedas is stems from the fact that the foundation of Indian philosophy is the experiments and experiences of our ancient rishis.  These are as valid and open to every test, experiment and experience even today.  Therefore, this wealth of wisdom has the answer to the myriad problems of the modern world.
On the subject of modern India, Dr. Tanaji observes that India has all the wisdom, knowledge, potential (physical, social, and spiritual) in its Vedic background.  But today India and its people are simply chanting the principles of Vedas and not practicing them in their true sense.  Philosophy has been reduced to lip service and not translated into action. So India’s progress in the modern world is stunted and does not measure up to its potential.  Therefore, the desired results are not achieved.
Talking about the importance of family life, Acharya ji believes that the family is a place where you have to give and give more.  It is a place of devotion.  The family is a small sanskar shala (school) where we all learn the basics of life and culture.  The role of children, because they are growing in life, is to take and receive; but they must respect parents and elders.  Similarly, the role of elders is to love the children, give to the children and provide guidance.  In this way, selflessness is the basis of family life.  It also embodies, in general, the philosophy of life as contained in the Bhagvad Gita, that is, action without expectations.
Finally, in keeping with his strong interest in yoga, for Acharya ji the path of enlightenment is provided by the eight-fold system of yoga (Ashtan Yoga).  This is true for all people – individuals and society – and provides for the upliftment of all together.  This is a unique vision of Indian civilization.
Despite his deep knowledge and understanding of the Vedas and his ability to communicate their principles in simple terms, Dr. Tanaji considers himself a lifelong student and not a master of philosophy.  He is on a never-ending journey of seeking more knowledge.  Along the way he wishes to play his role in providing the world with a vision of our ancient Indian philosophy, which is, to be natural and rational.
Acharya ji is available for any Vedic ceremonies, sanskars, and discourses.  He also conducts weekly classes in meditation and yoga, Vedas and Upanishads, and Sanskrit at the Arya Samaj Greater Houston.  He can be reached at (281) 920-0306 or (281) 752-0100.